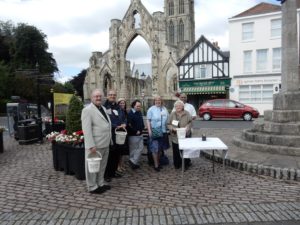 Countryside compassion for the city

We’ve just received a brilliant email from Revd Sue Pegg, Methodist minister in Yorkshire – a great example of rural Christians responding with compassion to those beyond their immediate community:

‘When the Christian community in the East Yorkshire market town of Howden (population 4,000) heard of the terrible Grenfell fire in London they got together and, with permission from the town council, organised a bucket collection in the market place which raised nearly £1,000 to help the victims of the fire.’

The ‘Christian community’ to which Sue refers is an ecumenical group which has grown out of the relationships that have developed between Howden’s Methodist minister, the Church of England vicar, the Roman Catholic priest and a retired United Reformed Church minister. While most of their shared activities have been local and church-based, the pressing needs created by the Grenfell Tower fire has prompted them to step out of their own community. Sue reflects:

‘We were so pleased that in some small way it was possible for the folk in our little market town to show how much they cared about those living in the country’s capital city.’

Are there any other rural churches and communities who have responded in practical ways to the Grenfell Tower fire? If so we’d love to hear your stories – email louised@germinate.net.

Strategies for mission and growth