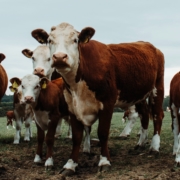 Lessons learnt from Foot and Mouth

As farmers, the 2001 foot-and-mouth outbreak is etched in our minds. Our tenanted hill farm, high in the North Pennines was surrounded by outbreaks. We could smell the stench of burning pyres drifting over the hills from Cumbria. In many ways it was like a child on a sandcastle watching the tide come in: would we survive or would we, like so many other farming families, see our stock washed away?

There are many similarities, even with subtle differences, between 2001 and the pandemic. Foot-and-mouth disease saw the countryside locked down while Covid saw the whole country locked down. In 2001 all livestock marts and movements were stopped almost immediately (in February) and didn’t resume until well into the next year. We had to sell our breeding sheep privately as the marts couldn’t operate to a farmer whose flock had been culled. Because of the movement restrictions we had to “put them to the tup” and look after them for a further four months until he was given the all clear by Ministry vets.

As foot-and-mouth disease dragged on both economic and mental health pressure built up for many farming families. If a licence to move stock could be obtained from the Disease Emergency Control Centre it seemed to take ages and then required military supervision and copious disinfecting. In some ways, not wanting to belittle the emotional anguish of “being culled,” losing your stock did bring some easing of those strains as fodder shortages, welfare issues and all the other associated problems of running a business under draconian restrictions disappeared.

Defra developed a system of “contiguous culling” which was then expanded to automatic three kilometre culls around confirmed infected farms. Farmers could reluctantly accept culling when foot-and-mouth was confirmed but it was rather more difficult to accept seeing healthy stock culled because that was what the rules said. In the heat of the moment things were said and blame laid that caused rifts in many farming communities that took a long time to heal.

The closing of livestock auction marts did have some long term and profound effects on the farming community. For many farming families the weekly trip to market was part of life. If there was no buying or selling to be done that week, one could still “see the trade”, order some feed, buy some wormer and get a new pair of wellies! More importantly for many farmers it was an essential part of their social life when they met their neighbour and heard the local news. For people who usually work on their own this was tremendously important for their social and mental wellbeing.

When restrictions did lift many farmers did not resume that weekly trip to the mart: they had got into the habit of not going. They had found other ways to do business and keep up to date with news, largely through the expansion of internet access and social media. Missing out on regular social interaction face to face has weakened the resilience of the farming community. Foot-and-mouth disease had increased the need for organisations like FCN to support farming families: the lifting of restrictions exposed new reconnection and reconciliation problems very similar to what we are facing nationally as lockdown is eased and relationship are renewed. The lessons learnt in 2001 are still relevant in 2021.

Loving God, we pray for all farmers, especially those struggling with limited opportunities to export livestock and other produce.

Be with them as they struggle with the financial impact of the current situation; may they and their families get the help and support they need.

Help us in the wider community to understand and support farmers better, valuing what they do to provide us with food.

Help us to see your light in the darkness and hold out that light to others. In Jesus name, Amen.