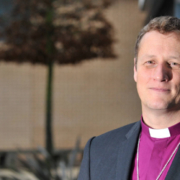 Here in the Church of England Diocese of Leicester (a “rural diocese with urban heartlands”), we’ve adopted ‘reconciling communities’ as one of our strategic priorities. It sits alongside our four other priorities: new communities (fresh expressions of church); intercultural communities; intergenerational communities and eco communities. But this one focuses in particular on the divisions which exist not just in our world but also in our church, and it is intended to make it clear that reconciliation is core to God’s mission in this world.

Perhaps the most vivid description of this in the New Testament is the Pentecost story. When the Holy Spirit came on those first disciples, they were suddenly able to speak the different languages of the people around about them. This, then, is a picture of what it means to translate the good news of Jesus Christ into the language and culture of the many different people groups of the world. It is intended to be an image of overcoming the barriers to communication and to understanding within this world. And we go on to see that worked out in other ways through the rest of the book of Acts.

For Christians, this means being willing to have good conversations with one another across our differences. Being willing to listen to one another – and by that, I mean a deep listening, not just listening in order that I can then argue with what somebody is saying. But a listening which is willing to take on board what somebody else is saying and allow their words to really take root within me, such that, even though I may not then agree with what they say, nevertheless I can disagree with love and with understanding.

But it’s only as we in the church practice these things and develop these skills that we can then be agents of reconciliation within the wider world. And we know we live in a society which is bitterly divided in all sorts of different ways.

So part of our work and our calling as a church is indeed to be people of reconciliation, to invite others to be reconciled with God but then also reconciled with one another. The two elements sit together, just as Jesus summarised the law as love of God and of neighbour. This then, has always been core to our faith, but now, more than ever, we need to make it a priority to learn how to be agents of reconciliation. 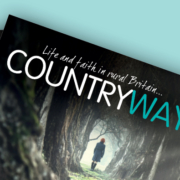 Over the last year, the churches of the East Trent Group in the Diocese of Southwell and Nottingham have been exploring how they might draw on the opportunities offered by traditional rural and farming festivals.

In 2019 we decided to get the Harvest Festival season off to a good start by holding a Lammastide service at St Bartholomew’s Church and an invitation was delivered to every household in the village.

This is one of those books that I last read fifteen years ago and have waxed lyrical about ever since. Then our editor asked me to review it for this ‘Common Ground’ edition of Country Way. Rereading this seminal work has been very hard indeed. I had forgotten how academic it is in style (nothing wrong with that), and my own engagement with theology of place over the last decade and a half has evolved so that I no longer have the same sense of excitement and discovery as I remember from my first few times of reading. Given it is seventeen years old, that shouldn’t be a surprise.

Imagine that you are a vicar walking into an ancient medieval church in rural Buckinghamshire. You step inside, turn right and are faced with rows of high box pews.

What are your first thoughts? ‘This church should be a museum; they could sell tickets to raise funds!’ ‘How can you preach to people sitting backwards?’

‘That pew would make a great ball pit.’?

Like everyone else, we at the Arthur Rank Centre didn’t expect to find ourselves trying to work in the middle of a pandemic this Spring. As government advice was published, we worked from home and became proficient in using Zoom, particularly so that we could continue our office custom of having coffee together at 11am. This social time has been a blessing, particularly for those on the team who live alone.

Life will never be the same again.

I’ve lost count of the number of times I’ve heard this refrain on the radio, the news, on social media over the last few weeks. In times of immense change, it can be hard to imagine life ever really going back to normal, and yet we all know from past experience as individuals and as Christian communities just how easy is it to fall back into try and tested patterns – good and not so good – after we’ve been through experiences that we think will change us forever.

Much of what this ‘new’ post-COVID-19 world will look like is – and will remain – impossible to predict, but we can, even now, begin to engage intentionally with its possible impact and in doing so equip ourselves to be better able to respond appropriately over the next weeks, months and years.

When I arrived in my parishes just under six years ago, communal Morning Prayer was not part of the routine. I had talked with my spiritual director about moving into parish ministry from chaplaincy and the one thing he said that stuck in my head was the importance of ringing the church bell and praying. Day one after my induction I duly rang the bell and said Morning Prayer on my own.

I stand at the door of the church, alternately looking along the path to the lychgate and glancing at my watch. Not every erstwhile pilgrim arrives on time, so I usually allow ten minutes after the ‘we are definitely leaving at x o’clock’ deadline. Two more people turn into the churchyard, one carrying a large rucksack, the other a small shoulder bag, together exemplifying the range of pack which individuals deem suitable for a day’s walk. I smile to myself – one of them will have everything they could possibly need, including a magnificent packed lunch; the other will have to make do with the generosity of fellow pilgrims if they want to eat. However, one pilgrim will become very tired on the uphill’s, maybe even needing their bag carried, while the other will merrily stride along in the vanguard of the group, keeping up a lively conversation as they go.

Nobody does breakfast like a farming family and I am certainly enjoying this one. Round the table are the Rev Rob Kelsey and the Birketts, Ali and Ruth. Over bacon and steaming pots of coffee I am hearing that something new is happening in Horncliffe.